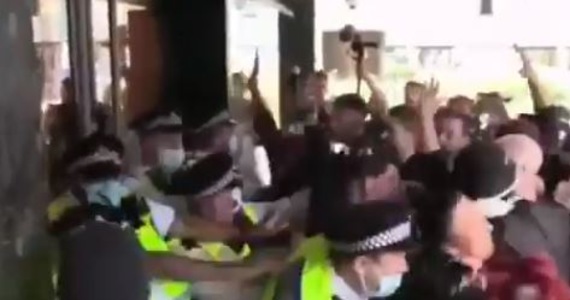 At least dozens of vaccines tried to storm the former headquarters of the BBC in west London this afternoon. There were quarrels and fights with policemen who were guarding the entrance in front of the building.

A tense interaction in BBC studios between police and protesters demanding that children not be vaccinated. Jabs are assigned to those over 16 and 17 soon without parental consent. #NoVaccinePassportsAnywhere pic.twitter.com/Ve9OVUPlo5
– Gillian McKeith (@GillianMcKeith)
August 9, 2021

In the early afternoon, in the city’s Shepherd’s Bush Green, there was a fairly large demonstration of opponents of vaccination certificates and the immunization of children, organized by a group called the Official Voice. Later some protesters walked towards the nearby former BBC headquarters, where they attempted to storm a building.

| Anti-health protesters take to the streets of London Thousands of people have gathered in London to protest the UK Government’s #COVID19 restrictions. Demonstrators clash with police outside the BBC Television Center in west London. pic.twitter.com/NQ7H08vZTL
– EHA News (@eha_news)
August 9, 2021

And according to what British media reported and videos broadcast, dozens of people participated in trying to enter the building – At least one succeeded. The recordings also show that officers were forced to use batons to defend the building.

The London Metropolitan Police reported that She hasn’t arrested anyone in connection with the incident yet, but she has seized the evidence.

The building that protesters tried to storm is part of the former BBC public office complex, formerly known as the BBC Media Village or BBC White City. In 2013, most of the buildings were sold to a private developer, and the only remaining part of the BBC is BBC Studioworks, a television subsidiary – also on a commercial basis to other stations.

The station’s headquarters, where it is broadcast, among others BBC News Channel is located in a different part of London.

In the UK, vaccination against Covid-19 is not mandatory, but The government has announced that only vaccinated people will be allowed into nightclubs from September. It also encourages mass event organizers to use vaccine certificates. However, it is a matter of very high sentiment, and even in the ruling Conservative Party there are a large number of MPs who are against vaccine certification.

See also  A BBC journalist saw in his account a booby-trapped building. "It's my home!"
Don't Miss it Will the United Kingdom disintegrate? – RadioMaryja.pl
Up Next Presides 2021. What is the date of “Night of the Shehab”? Where and how do you watch?