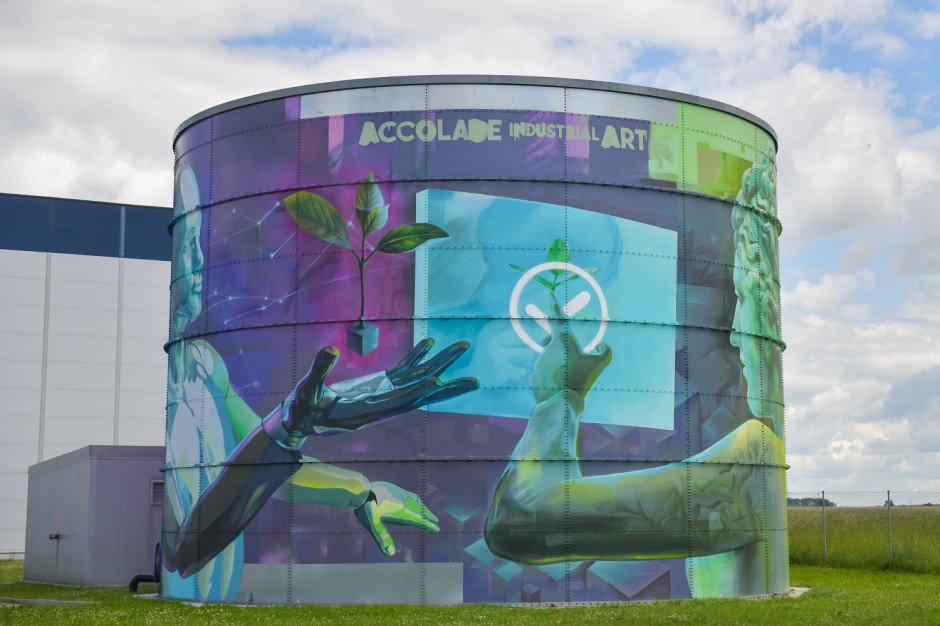 Accolade has unveiled a new mural on a water tank in the Mińsk Mazowiecki Industrial Estate. This is another artwork in the Accolade Industrial Art Collection designed and painted by famous mural artists – Jakub Bitka and Łukasz Chwałek.

The new mural was completed and officially presented to the public on June 14.

Once again, we have invited art into our industrial zones to improve the space in which our tenants and their employees spend a large part of the day. The mural is also clearly visible from the road and we are glad it will add color to the local landscape. This is our contribution to being a responsible investor and a good neighbor – says Małgorzata Więcko, Director of Asset Management at Accolade Polska.

Our creative concept is related to technological development and shaping the future of modern business. The main characters of the project are the woman who places the order and the man who delivers it. The classic flower face of a woman is associated with the concepts of beauty, nature and timeless art. We based the image of the man on a modern “courier” depicted as a robot. It is a symbol of technological development. Artificial intelligence and a machine allow us to fulfill all needs, even natural products, which is symbolized by, among other things, the robot delivered the factory to the party that ordered the purchase – explained Jakub Bitka.

During the implementation of the mural, workshops were held for the youth of the High School of Fine Arts. Elwiro Michał Andriolli in Mińsk Mazowiecki. The symbolic opening of the mural took place on June 14 with the participation of the Mayor of Minsk Mazowiecki Marcin Yakubovsky.

– This is another mural we did for an Accolade investor. As in Zielona Góra, the entire project is based on impressions created on many visual and conceptual levels. The composition of the structure is due to the cylindrical shape of the tank. The distance of the reservoir from the main road requires the use of clear and fairly large shapes and contrast of colors. The cylindrical shape means it can’t be seen from a single perspective as a whole – parts of the story are always obscured. In our project, we used the screen image at the point of interaction of the two main characters to illustrate the online ordering and delivery mechanism. We order through the screen without seeing the other side, although we are aware of its presence. The coating technique was not much different from the previous tank – thanks to the large number of screws, most of the paint was sprayed, but where the surface allowed we tried using rollers to give the structure a more painterly – Łukasz Chwałek was added.

Completed in 2017, Mińsk Mazowiecki Park has an area of ​​15,000 square meters and is fully leased. The park is perfectly connected thanks to the A2 motorway, which crosses the entire country from the border with Germany to the Belarusian border. In just 40 minutes you can reach the center of Warsaw.

Don't Miss it The Estonian grabbed the promotion after an exciting battle. It will be a competition for the Brazilian plate
Up Next UK inflation has risen to a 40-year high