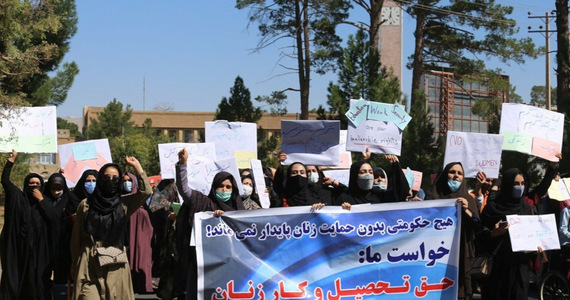 “We are not afraid, we are united,” chanted women gathered in front of the governor’s office, AFP reported, “we have the right to education, work and security.”

One of the organizers of the demonstration, Fariba Kabarzani, stressed the need to include women in the newly formed government.

Dozens of women protested outside government offices in #Herat, #Afghanistan, demanding continued access to education, jobs and roles in government in the wake of the #Taliban’s takeover of the country. pic.twitter.com/ZKK2WgfZjf
– Fadhila Baloch ☀️ (IFazilaBaloch)
September 2, 2021

– We want the world to hear us and that our rights are preserved – Kabarzani emphasized. She added that thanks to the many sacrifices, women in Afghanistan have achieved a lot in the past 20 years and will not give up.

Don’t be afraid we are together #Herat Afghanistan pic.twitter.com/ty2jcVIAZX
Farahnaz Forotan
September 2, 2021

During the first Taliban government in Afghanistan in 1996-2001, the vast majority of women and girls were denied employment and education opportunities. In public, women were only allowed to be accompanied by a male relative, and had to wear a burqa that covered their entire body, including the face.

August 15 this year. The Taliban regained control of Afghanistan. Taliban officials are trying to portray the movement as more tolerant than it has been in the past. According to the Taliban’s announcement, the woman will be able to work and study, and will not be forced to cover her entire face – all she needs is to wear a headscarf that covers her hair. Statements were also made about the possibility of Afghan women participating in the government.

However, media reports indicate that many Afghan women do not believe in the Taliban’s vague declarations of equality and respect for their rights, and fear their future. AFP writes that many women are afraid to take to the streets and stay at home. “We saw the Taliban beating women again,” one Afghan protester told the Associated Press.

Gawkowski on ‘Rymanowski’s Breakfast at Polsat News and Interia’: Poland got support in Afghanistan
polsat news