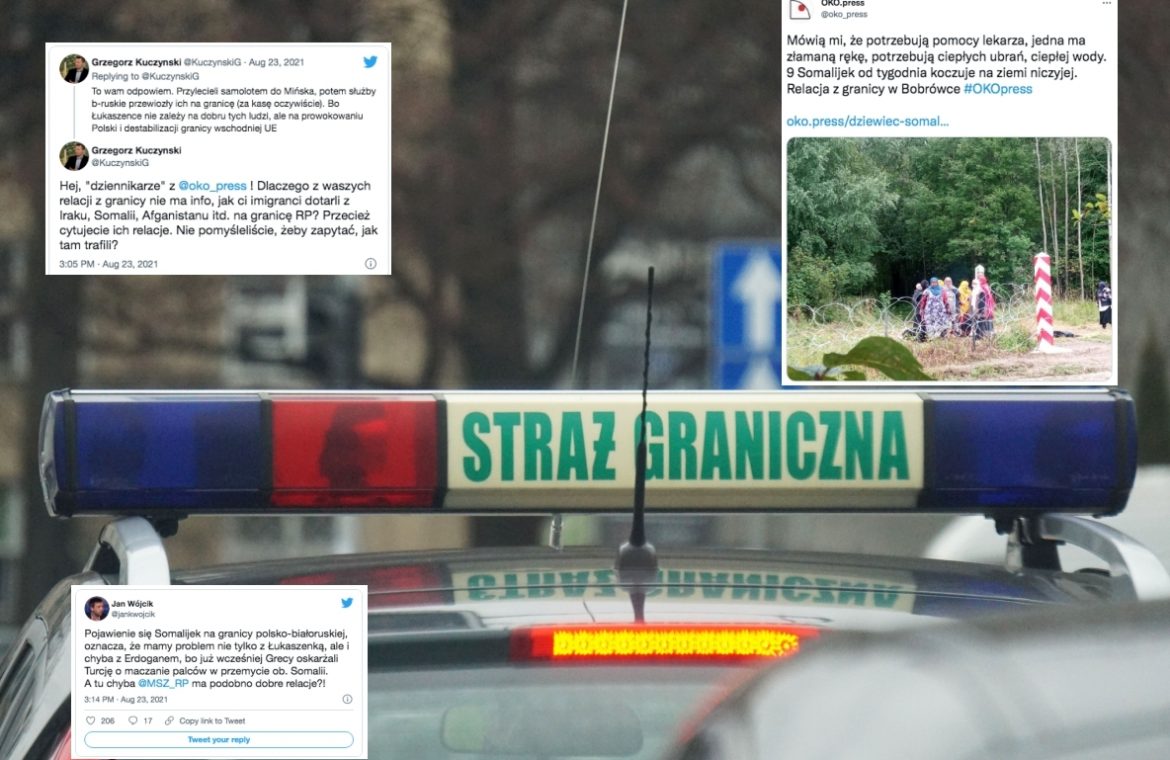 A short report from the Polish-Belarus border, and more specifically from the vicinity of the village of Bobroka, appeared on the website OKO.press. Reporter Igor Nazaruk describes having met a group of eight women who, he wrote, convinced him that they were from … Somalia. Interestingly, although Nazarooq told them that he spoke to them as much as their English would allow, he did not ask them how they ended up on the border with Poland. There have been a lot of comments on Twitter about alleged Somali women roaming along the Polish border.

„I don’t see any children

Nazaruk writes that although he met alleged Somali women at the place where the barbed wire laid by the Polish services ended, the women did not want to go to the Polish side.

They have been here for seven days, they are from Somalia. I don’t see any children, but there are teenagers. The oldest Somali woman may be around 50 years old, all covered with their heads and some of their faces as well. (…) Exactly where the Somali woman stands, the famous tangle of barbed wire ends. They can walk, take a few steps towards me, but they don’t. They showed me with autographs that they were afraid not to come here

Where did the alleged Somali woman come from near the Polish border? We didn’t learn this from an OKO.press reporter’s text. However, Internet users have their own interpretations of the whole situation.

Somali women near Hajnówka? 8400 km? Via Sudan, Egypt, Israel, Lebanon, Turkey, etc. Across 3 seas? Something stinks a lot here, and this is not just an action by Belarusian comrades, unless they have captured it from some merchant.

If they are Somalis, then surely they came via Turkey, a country that is involved in helping Somalia, a country that has cultural exchanges with Somalia, and provides military assistance where Somalis are studying. Could they not have stayed there?

The appearance of Somali women on the Polish-Belarus border means that we have a problem not only with Lukashenka, but also probably with Erdogan, because the Greeks accused Turkey of dipping their fingers in smuggling. Somalia. And maybe here @MSZ_RP has a good relationship?!

Hello, oko_press “Journalists”! Why is there no information from your reports from the border about how these migrants from Iraq, Somalia, Afghanistan, etc. got to the Polish border? After all, you are citing their accounts. Didn’t you think to ask how they got there?

Since when is Somalia located on the border of Poland? Is this from this side? Moreover, there is no such thing as “no man’s land”. They are in Belarus, there is also water and there are doctors

How many countries did these Somali women pass through to reach the Belarusian-Polish border?

The level of reporting is limitless, I don’t care who’s standing on the border, because that’s the purpose of the border. But I am confused about the truth and am amazed that no one is asking about it, how did these Somali women get there?

As far as can be said, there is no such thing as no man’s land. nothing. When one state ends, another begins. There is no magic space between them. And what are Somali women doing XD here, the narration is somewhat distracting to some, because it was only supposed to be Afghani.

See also  This is what a strict lockdown looks like in the battle against COVID-19. In Shanghai, building exits have been blocked due to the wave of coronavirus infection. fences
Don't Miss it USA: Joe Biden rejects the outcome of the Afghan crisis
Up Next Annoyed by Android clutter? HarmonyOS offers a great solution