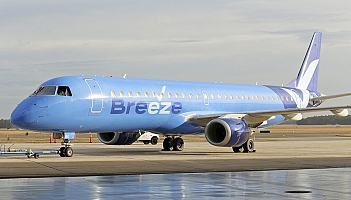 The new airline, David Neelman, has opened its maiden flight. Breeze Airways wants to combine the advantages of low-cost airlines and full-cost airlines.

The new US airline on Thursday (May 27) began regular passenger flights. Breeze’s first flight MX1 from Tampa, Florida, to Charleston, South Carolina, was serviced aboard an Embraer E-195 (N190BZ). On the same day, the line also opened other routes from Tampa, Charleston, and Hartford.

The new airline focuses on direct flights between small and medium-sized US cities where there is no competition. As revealed by David Neeleman in one of the interviews, when developing a communications network, the company analyzed the capabilities of about 500 pairs of cities to choose those in which there is the possibility of launching direct flights.

Breeze Airways has started operations with four Embraer 190 aircraft for 108 passengers and three Embraers 195 aircraft for 118 passengers – during the summer season, the airline’s fleet is scheduled to increase to thirteen of these machines. In January 2019, the line applied for 60 Airbus A220-300, Then in April of this year. The contract was increased to 80 copies. These aircraft will be assembled at the Airbus plant in Mobile, Alabama. Deliveries are scheduled to begin in October 2021 and continue until 2026. Unlike embraers, the A220 will also have premium seats on board.

The company is currently present in four US cities (Tampa, Charleston, Louisville and Hartford), but in the coming weeks it plans to significantly expand its communications network on the East Coast and the southeastern part of the United States. Breeze Airways will launch flights to Tulsa, Norfolk, Bentonville/Fayetteville and Akron/Canton in June, while the airline will operate in New Orleans in July.

Don't Miss it North Korea: Kim Jong Un has not appeared in public for 25 days, the longest this year
Up Next A GTA 5 fan creates game movies so good that he was hired by Rockstar • Eurogamer.pl