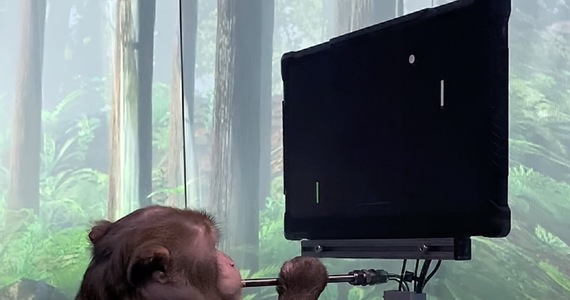 “A monkey plays a telepathic video game with a brain chip,” Elon Musk excitedly announced on Twitter. but when? In five or ten years? At the moment! Check it out in the video.

It shows a 3-minute video posted by Neuralink and co-founded by Elon Musk, Pager – a male macaque. A nine-year-old animal with chips embedded in both sides of its brain and plays Mindpong. Although he was trained to move the joystick, the device is not connected. The pager controls the game only by thinking of moving the paw up or down.

During recording, the audio commentary demonstrates that Neuralink works by recording and decoding electrical signals from the brain with more than 2000 electrodes. They were implanted in the areas of the motor cortex responsible for the movements of the animals’ arms and hands.

This was announced by a billionaire and businessman Neuralinka products will revolutionize, among other things, medicine.

“The first product from Neuralink that will enable a person with paralysis to use a smartphone faster than anyone using their thumb,” Musk wrote on Twitter.

Neuralink’s first product will enable a person with paralysis to use a smartphone on their mind faster than anyone using a thumb.
Elon Musk (@elonmusk)
April 9, 2021

The San Francisco-based company, which has been in business since 2016, wants to implant chips to also help treat neurodegenerative diseases such as Alzheimer’s disease, dementia and spinal cord injuries. The company has another goal – to connect humanity with artificial intelligence.

“Later versions will be able to transmit signals from Neuralinks in the brain to Neuralinks in the motor / sensory neurons in the body, allowing, for example, paraplegics (people with paralysis of the lower extremities) to walk again. The device charges wirelessly, so you will look and feel completely natural– Elon Musk added in the next post.

The Neuralink Musk Implant was introduced in August 2020.

The entrepreneur has experience investing in technological innovation. Among other things, he has produced rockets and electric vehicles through companies such as Tesla and SpaceX.

Elon Musk is the richest man in the world

See also  Amazon is also warning Xbox Series X customers who pre-order that their consoles may appear late
Don't Miss it Trump is gone, and the blacklist still exists. The Americans have just banned the Chinese supercomputers
Up Next Indonesia. Underwater earthquake of magnitude 6.7 near Java. Shocked hotels in Bali | News from the world