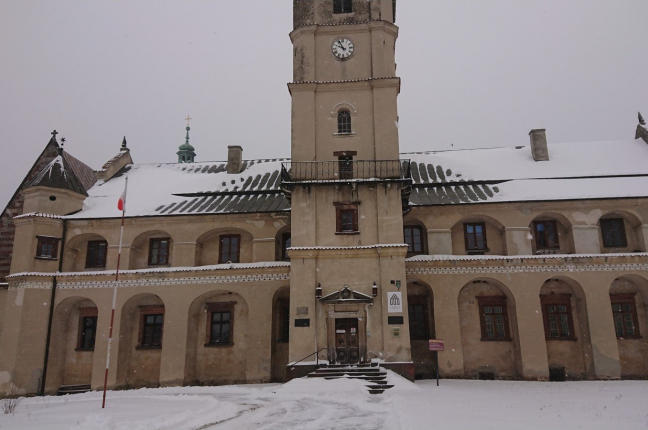 This year, the Cistercians from Wąchock will celebrate the 70th anniversary of their return to the monastery after 148 years of the order’s dissolution.

The main celebrations will be at the end of November, regarding the date of the monks ’return to Chowk, which is November 21. However, the monks are already preparing for this event.

There are plans to introduce a new monastery sign. Its author is Matthews Kania, a theologian from the Warsaw-Braga diocese who deals with computer graphics and comes to Tridentine audiences in Chowk. Father Fabian Scoron says that one of the monastery’s most distinctive architectural elements was used to design the abbey’s emblem, the Romanesque Pefora.

It is a window in the chapter house, the most architecturally valuable place in the monastery. The three galleries symbolize the Holy Trinity, and the space separated by a column symbolizes the two natures of Christ, as the monk explains.

The bifurium was made with an anonymous cobblestone (Lapisid). The items he used combine Italian and Burgundy influences. The colors used: black and white – refers to the custom color of Cistercian.

The sign will be used on official monastery paper, and will appear on the Internet and in promotional posters.

See also  Students are returning to schools in a hybrid way
Don't Miss it Card. Turkson on Vatican Council and Council on Global Capitalism cooperation
Up Next Netflix featured a trailer for the children’s show “Gofcia and Mochi” starring Michelle Obama