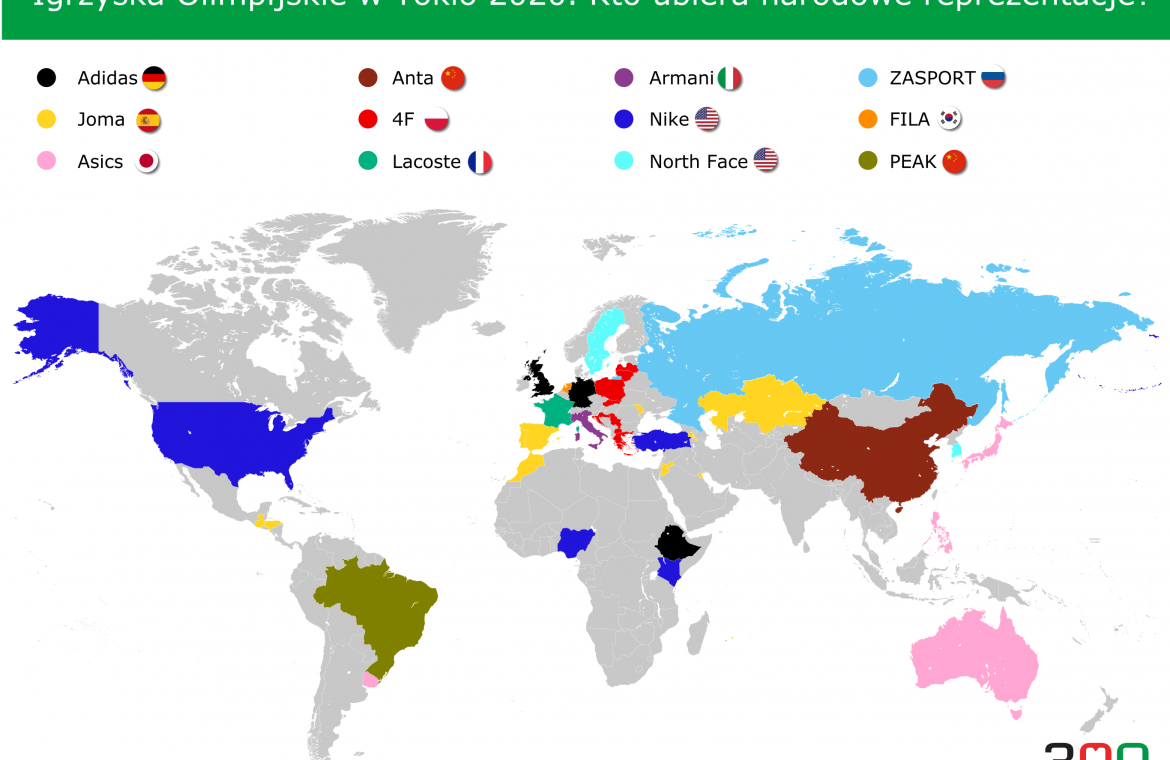 Economy examined the number of national teams at the Tokyo Games worn by the world’s largest clothing companies. The 4F logo appears on the uniforms of athletes from eight countries, making the Polish brand the second largest producer of athletes’ clothing at the Olympics.

In our analysis, we focused only on the largest clothing companies, because it happens that some companies wear only one representation: for example Armani clothing for years they wear Italians only during the athletic struggle.

It also happens that individual teams or players compete in company uniforms different from the rest of the national team, such as the Polish tennis player Hubert Hurkacz, who goes to the court in the uniform of Lotto, which he sponsors on a daily basis, or the Polish men’s volleyball team that plays for Adidas.

We did not take such cases into account in our statement. We focused on apparel companies that have the status of Official Supplier of Sports Equipments to Individual National Teams and Official Partners of National Olympic Committees.

During the opening ceremonies of the Games, many national teams wore corporate uniforms other than those worn by athletes to compete in competition.

For example, at the opening ceremony, US officials wore scarves decorated with the American flag and jackets with the massive Ralph Lauren logo. However, they are getting closer to the competition wearing Nike clothes. For clarity, we have omitted such cases in our analysis.

And finally, the last methodological note: many representations do not have a single formal partner and therefore there are many unknowns on our map.

In addition to our own research, we also sent questions to the largest companies: Joma, Asics, Adidas, Nike and Anty, but only received a response from the press office of the German company Adidas. That is why we relied on our own work for the rest of the companies.

Joma, Nike i 4F in the podium

Polish company logo 4F It appears on the uniforms of athletes from eight countries, making the Polish brand the second largest producer of athletes’ clothing at the Olympics.

Only the Spanish manufacturer of sports shoes and apparel is waiting for us Juma.

Not only are they wearing clothes designed by a Polish company Polish people, but also neighbors from the eastern part of Europe: SlovaksAnd LithuaniansAnd The GreeksAnd Croats. The 4F mark on the shirts also has national teams LatviaAnd North Macedonia I Serbia.

4F It is a Polish brand of sports clothing and accessories founded in 2003 in Kielce by Igor Klaga.

Since 2008, the company has been cooperating with the Polish Olympic Committee, preparing competition and representative clothing for the Summer and Winter Olympics,

The 2010 Vancouver Winter Olympics were the first in which Polish athletes appeared in costumes tailored for the occasion from 4F.

Since then, the largest Polish sportswear brand has been constantly preparing special collections for Polish Olympians.

See also  Polish Technology Day starts on May 28 with the theme: Technology and Impact

Wearing Poles isn’t limited to costumes designed by a Polish company. It was also founded by neighbors from the eastern part of Europe: SlovaksAnd LithuaniansAnd The GreeksAnd Croats. The 4F mark on the shirts also has national teams LatviaAnd North Macedonia I Serbia.

This means that the best tennis player in the world is currently wearing a 4F uniform during training and accompanying events Novak Djokovic (He wears Lacoste’s clothes for the same matches, with which he has a long-term singles contract – as in the case of Lotto and Hubert Hurkacz.)

Most representations are in JOMA fashion

clothes Gumi It is worn by athletes from Spain, Portugal, Malta and Moldova, as well as from Asian countries (Armenia, Kazakhstan, Jordan, Kuwait).

Adidas 300 Economics reports that it is the official supplier of Olympic clothing to Great Britain, Hungary, Ethiopia and Germany, where the brand comes from.

However, the American nike He designed clothes mainly for players of specific disciplines. For example, he created football clothes for the national teams of South Korea, Nigeria and the Netherlands.

The collaboration with Piet Parra resulted in the production of skateboard clothing for Brazilians, French and Japanese.

When it comes to national teams, the brand officially wears American athletes.

See also  How to keep electronic customers after the record-breaking year 2020?

In addition, Kenyans, Turks, and Nigerians wore the costumes she designed. The clothes of the Turks had a distinctive feature; In addition to the Nike branding, it has a monogram by Boniamin Aydin.

Like Adidas and Nike, the Japanese company Asics has also designed tracksuits for four Olympic teams. These are Australia, Japan, the Philippines and Uruguay.